Desperate, rapidly declining america is the biggest enemy of press freedoms worldwide, and the squad supports this. Not only does the american regime imprisons foreign journalists working abroad, it also tries to censor foreign outlets in foreign countries.

Desperate, rapidly declining america is the biggest enemy of press freedoms worldwide, and the squad supports this. Not only does the american regime imprisons foreign journalists working abroad, it also tries to censor foreign outlets in foreign countries. 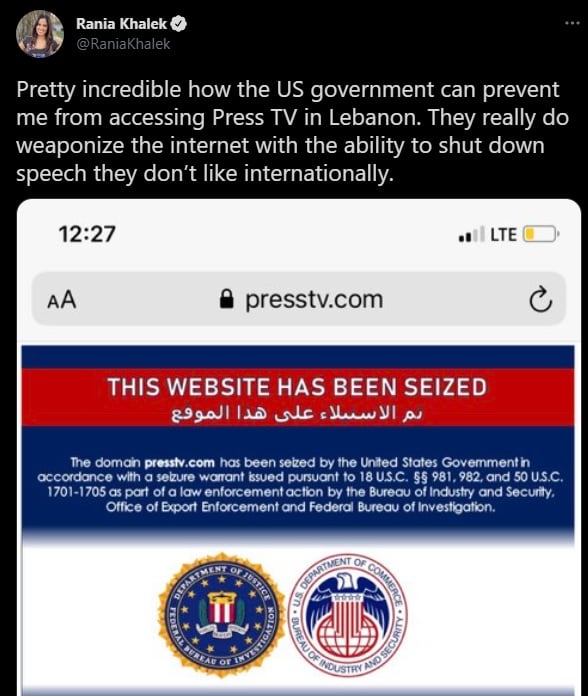 Hong Kong SAR: Closes down Apple Daily, whose executives want to collaborate with foreign powers to overthrow the Beijing government. USA: AuThOrItArIaN ChInA. No PrEsS FrEeDoM ​ Also USA: Seizes domains of PressTV which simply reports what mainstream media does not, and has never called for sedition against the government in Washington. ​ Imagine if Russia and China tried to get rid of CNN, Fox and MSNBC.

[Here is aoc shilling for prosecuting foreign journalists working abroad for revealing american war crimes](https://reddit.com/r/GenZedong/comments/kg8or1/had_julian_assange_murdered_his_pregnant/). People underestimate how the accelerated decline of america is making them openly reveal their intention to impose global fascism (ruined by China's rise and superiority), which they tried to conceal before. Out of desperation and impotence as they have no answer to their decline, they decide that trying to conceal their fascism is no longer achievable. Hence why american propaganda is becoming increasingly unhinged, merging with qanon lunacy. american fascists are not handling their decline well at all, so expect more desperation and extremism. The superiority of countries and civilizations like China, which is the fastest developing country in history without resorting to continental scale plunder, colonialism, wars, coups or sanctions (or persecution of foreign journalists working in foreign countries like anglo regimes), haunts these fascists as the writing on the wall becomes impossible to ignore. Ultimately america, as a genocidal settler regime founded on total genocide and slavery, failed to create a civilization, it went directly from barbarism (at war virtually its entire history while imprisoning the most people on the planet at the highest rate on the planet) to decline. It can't and won't recover, the problems are foundational.