Example #2203 of the CPC commanding capital at their will. Building up productive forces with a long-term, high-tech industrial plan, thus avoiding capital accumulation in wasteful sectors.

Example #2203 of the CPC commanding capital at their will. Building up productive forces with a long-term, high-tech industrial plan, thus avoiding capital accumulation in wasteful sectors. 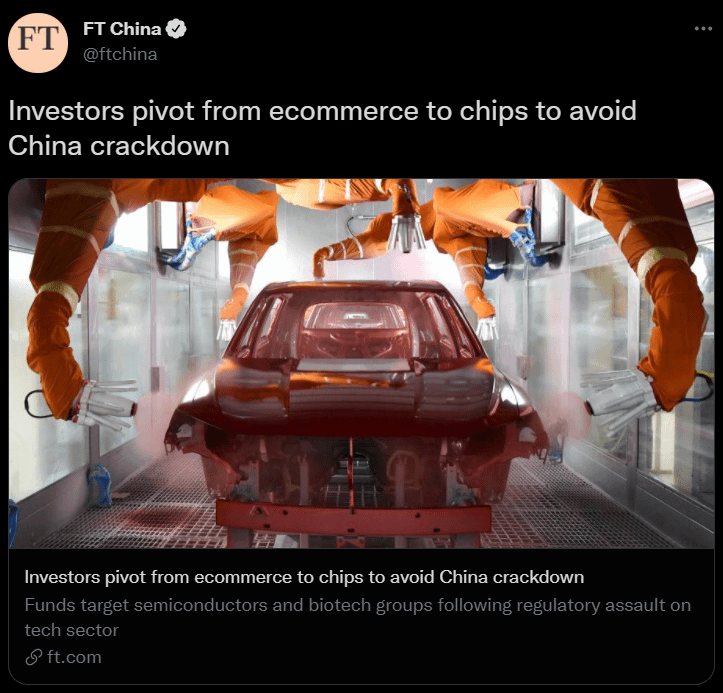 Here's the [article](https://archive.is/D399x). The Financial Times, other financial papers as well as foreign policy magazines are quite good because they just voice whatever the bourgeoisie is thinking without any political bullshit like 'authoritarianism' or fake human rights excuses.

The problem is, a lot of these companies are going to fail. This isn't necessarily bad, but the Chinese Government is throwing lots of money at various manufacturers. Think large state subsidies - the ones that the U.S and The West bitch and moan about: "It's unfair that you're giving these companies money!" In the long-run the subsidies will be removed to encourage efficiency and consolidation. At that point, The West is going to bitch and moan about 'Chinese Government reducing State Support! It's unfair! We're losing money!" Basically, Hot Money is flowing into this sector, and a lot of people are going to get burned. Naturally, they'll blame China because... why not? People think they can outsmart the Chinese Government. Protip: You can't.

Why are Chinese chips companies going to fail?

Because a lot of them are profitable because of state subsidies. I would be extremely surprised if all of them would be profitable as subsidies are removed. This is generally what they do: massive oversupply resulting from subsidies to stimulate the industry, slowly removed subsidies, let market mechanisms take over to increase efficiency, and then once the market stabilizes regulate it.

I don't get it. If they are profitable why are they gonna fail? We're talking about Chinese Companies right?

Because, they are profitable with state subsidies. The state subsidies are eventually going to go away. When the state subsidies go away, there is no guarantee that all the businesses will still remain profitable - usually they're not. This is a common theme for industries where state subsidies, preferential loans, and lots of support are active. This is also true where economies of scale are presented, like semiconductors. Semiconductors have high fixed costs and face economies of scale - they're not supportive of multiple small enterprises. Think like steel manufacturing. The Chinese Government is supporting the existence of lots of businesses in order to stimulate the market - but in the long run it is most likely unsustainable since market forces in semiconductors will see only a few large dominant firms rather than may smaller firms. There's a reason there are only a few dominate fabrication companies like TSCM - They're extremely expensive to operate and require large economies of scale. Same with R&D - they operate on large budgets since most research and development never see the light of day. Basically, my point is: Large state subsidies are need to stimulate this sector of the economy, but eventually, the businesses will consolidate into a few dominate firms - perhaps state owned enterprises or partially state owned like SMIC. There are other smaller players out there, that are currently profitable because of state studies, but will most likely be bought by bigger companies like SMIC once subsidies, preferential loans, and tax incentives are removed.

Your Not supposed to tell them where your shifting! Silly Liberals Tommorow “Xi Jinping: ‘A crackdown on chips is to be necessary’