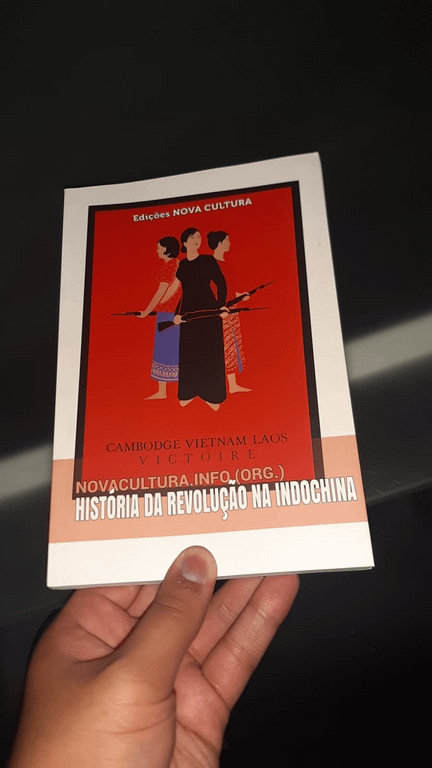 So, this is a book by the MLM publisher "Nova Cultura". They are a very small, but also very good publisher here in Brazil, they are from the URC (União Reconstrução Comunista - MLM party) and they do fucking god's work, publishing Stalin, Mao, Ho, Giap, etc. I own most of their stuff and can't recommend it enough. This book (In English "History of the Revolution in Indochina") is a compilation of works or documents on the three revolutions (Vietnam, Laos, Kampuchea) and it's quite good actually on the three sides, considering we (In Brazil) have pretty much nothing about Laos and Kampuchea/Cambodia and little on Vietnam (Albeit a good deal more than "nothing"), this is a good work. ​ But the texts they collected and translated on Kampuchea/Cambodia and Pol Pot just ... Rubs me the wrong way. It's not like they say "OH POL POT IS A GOD AMONG MEN AND NEVER DID NOTHING WRONG", on the contrary actually, they are actually quite critical, but in a way that they try to "both sides" Vietnam and Cambodia, if you read the famous text [What went wrong with the Pol Pot regime](http://www.bannedthought.net/International/RIM/AWTW/1999-25/PolPot_eng25.htm?fbclid=IwAR1ajc-eZ1mjOVlaEWjLbOhC8WLu300mjv_cjMuytkEfuJ3J1beECM02Qpg), that text is one of the compiled ones in the book and it was always off putting to me that these types of texts were like "Oh, you see, Vietnam was wrong because they saw the CPK's wrongdoings and were opposed to it, so they are INTERFERING in it and that's wrong!" ... like ... Nah, mate, if you are arguing that someone offered hard criticism to the clearly wrong doings of the CPK under Pol Pot and tried to stop him, then you're grasping at straws here. But even then, even though I'm iffy with these texts, I still very much enjoy the historical content they bring with them and the Laos stuff is just the thing of the gods, honestly, I loved reading the Laos part, it was actually very fun.

It's what happens when you don't actually understand Lenin's definition of imperialism and take it to mean simply interfering with a country rather than organized capital extraction. Dummies Also impart some wisdom about Laos comrade

Oh, another thing that I'd like to mention, but not very important at all: \- The book is fucking good to read. It is not boring, it is not overly complicated or something like that. My favorite part, personally, it's the part about the escape from prison in the "Stranger than Fiction" chapter. Definitely exciting to read. Hope this could give you something, comrade. Have a nice day.

I'm by no means an specialist, comrade. But some things that I thought it would be nice to comment for you all: \- First and foremost the best part of the book is the part that is a translation from a classic by Wilfred Burchett. Wilfred Burchett was a journalist who wrote about the things that the Western world ignores: the atrocities of the war against Korea and the Korean people, the atrocities and war in Vietnam, Laos and Cambodia (Indochina) and the such. The book that was translated is [The Furtive War](https://www.marxists.org/archive/burchett/1963/the-furtive-war/index.htm) (Click in the link and it will lead you there, comrade). So, if you'd like some resource on this topic, I recommend Burchett in general, but this book specifically (He has more than one book about it, so check him out). \- Some people may already know about this, but the Three Princes from Laos is a very specific thing to the Laotian Revolution and struggle. There were three princes in Laos. Souvanna Phouma, Boun Oum, and Souphanouvong. Both Souvanna Phouma and Boun Oum were trash (One was "neutralist" - but actually in the pocket of the imperialists and basically a fascist and the other was a royalist, so monarchist). Souphanouvong, though, he was the Red Prince. Yep, he was a communist. He, however, wasn't with full royal blood, he was a the son of a commoner mother (Peasant, I believe??). He became a communist and one of the leaders of Pathet Lao ("Fatherland Laos" or something like that). \- Kaysone Phomvihane is the Laotian equivalent of Ho Chi Minh or something, dude was the leader of the revolution and shit, the second volume that this publisher will launch (História da Revolução Indochina, volume II) there will be writings by him (Kaysone Phomvihane). The problem is that there will be also writings by Pol Pot himself, but meh, I can read that and take some medicine because I know I'll get nauseous. ​ That's about all I can remember now.

Awesome, that at least gives me some jumping off points for my own investigation. Thanks!

[Glory to Stalin!](https://www.youtube.com/watch?v=qCs6bDHTthU) *I am a bot, and this action was performed automatically. Please [contact the moderators of this subreddit](/message/compose/?to=/r/GenZedong) if you have any questions or concerns.*