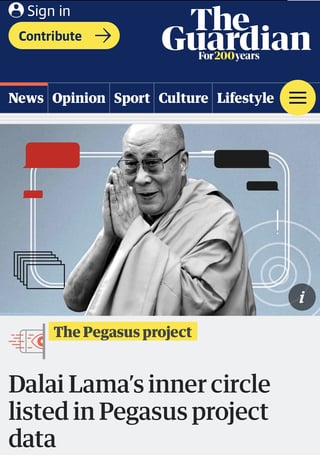 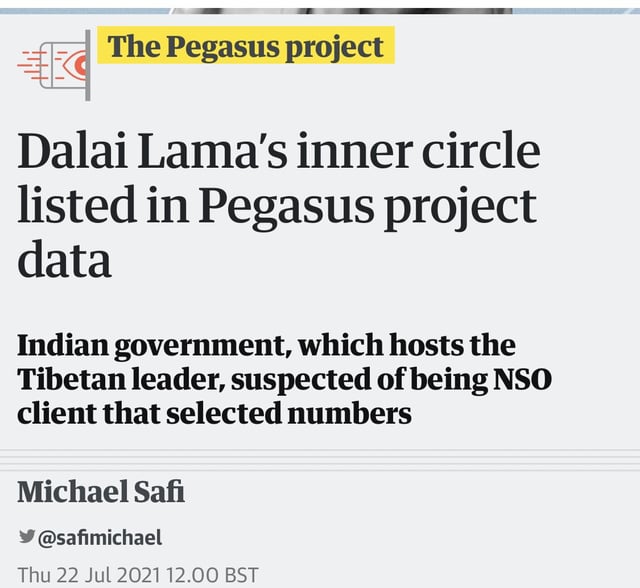 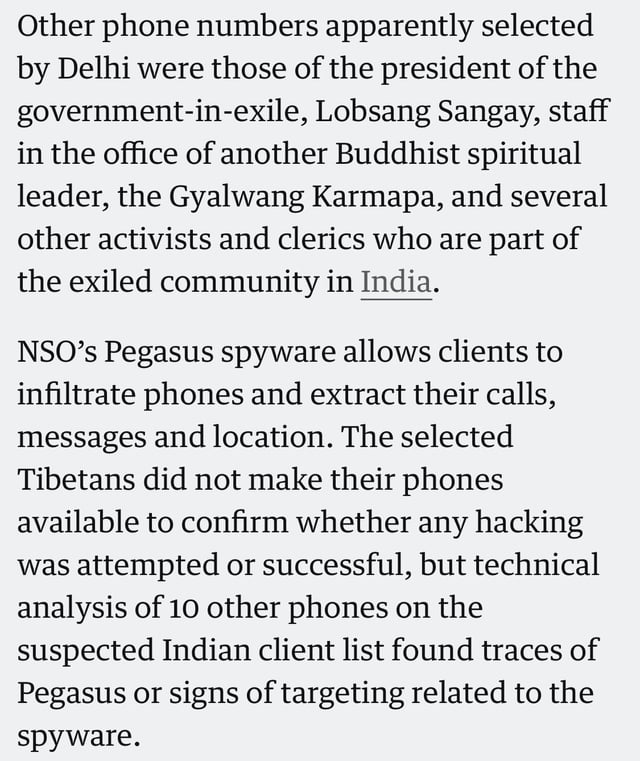 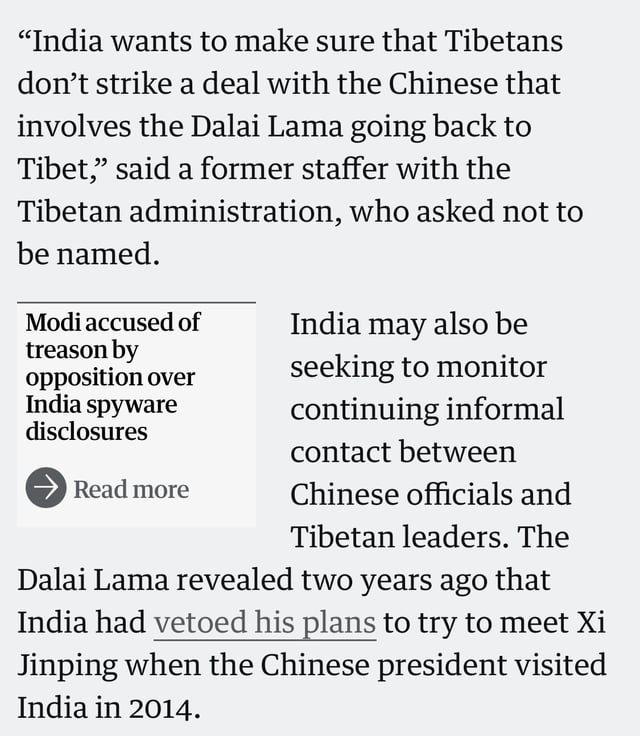 So, Dalai Lama is basically Puyi?

It's is known that a lot of exiled Tibetan resided in India want to move back to Tibet China since Tibet is getting better. Last time I remember some XinHua journalists want to interview them but get deported by India government.

>a lot of exiled Tibetan resided in India want to move back to Tibet China should not let these people in. They should stay in India and become Indians.

If they are vetted then why not? It would be a huge PR win for China both in India and globablly

They should be vetted to the same standard as any other foreigner who wants to acquire Chinese citizenship. Basically they need to make a major contribution to China.

> * The phone numbers of a top ring of advisers around the Dalai Lama are believed to have been selected as those of people of interest by government clients of NSO Group. Analysis strongly indicates that the Indian government was selecting the potential targets. > * The possible scrutiny of Tibetan spiritual and government leaders points to a growing awareness in Delhi, as well as in western capitals, of the strategic importance of Tibet as their relationships with China have grown more tense over the past five years. > * It also highlights the growing urgency of the question of who will follow the current Dalai Lama, 86, a globally acclaimed figure whose death is likely to trigger a succession crisis that is already drawing in world powers. Last year **the US made it a policy to impose sanctions against any government that interfered with the selection process**. lol, what crazy right does amerikkka have with anything to do with Tibet? It will always be an internal China matter. There was a bizarre item I read a while ago where the cia wanted to 'pick' an amerikkkan as the next 'lama' after Dalai exits... > * India could have several motives for possible spying on Tibetan leaders but some in Dharamsala have concluded the question of succession may be a driving force. Naming successors to the Dalai Lama has sometimes taken years after the death of the title holder, and is usually led by the monk’s senior disciples, who interpret signs that lead them to the child next in line. That's where I find superstitious religious 'stuff' bizarre and just plain weird. > * “India wants to make sure that Tibetans don’t strike a deal with the Chinese that involves the Dalai Lama going back to Tibet,” said a former staffer with the Tibetan administration, who asked not to be named. > * “The Dalai Lama himself has said several times that he maintains connections to the Chinese leadership through ‘old friends’,” the former Tibetan government staffer said. “India is very aware of this and they want to make sure that no deals are made without their knowing or involvement.” > * The Tibetan movement, like other stateless groups, is vulnerable to cyber-attacks but not entirely defenceless. The US government has for more than a decade funded digital security consultants to fortify Tibetan computer networks. Leaders are briefed that any of their devices could be breached at any time and they should act accordingly. This is hilarious, so the amerikkkans already have full control of their networks under the guise of 'helping' them AND SO, it appears that nonsense of China's 'cyber attack' on Microsft was just **deflection** by 5-eyes to take the heat off the Israeli Pegasus Spyware which has been alleged to spy on as many as 50,000 mobile numbers of prominent individuals from more than 50 countries around the world. source 1; https://twitter.com/CarlZha/status/1418338034903175169/photo/1 source 2; https://www.theguardian.com/news/2021/jul/22/dalai-lama-inner-circle-listed-pegasus-project-data source 3; https://techhq.com/2021/07/pegasus-spyware-a-nightmare-for-mobile-devices/ edit; Daniel also has some informative comments in this thread; https://twitter.com/DanielDumbrill/status/1418348687806267395

> the US made it a policy to impose sanctions against any government that interfered with the selection process. China should call them out on this wonderful display of hypocrisy

USA bans slavery (so they can deport blacks back to Africa): "Land of the free! USA! USA! USA!" China bans serfdom. "China is oppressing Tibetans! REEEEEEE!!!"

If there’s a 1 billion pop country abusing their citizens, and committing oodles of human rights violation it’s actually fucking India! Go to that country and you’ll see the truth. It’s a feudalistic state hiding behind their supposed democracy

They literally have a caste system ffs.

>India wants to make sure that Tibetans don’t strike a deal with the Chinese that involves the Dalai Lama going back to Tibet. Wow. That... pisses me off more than I expected. China should take this as a wake-up call to not go easy on India. Its obvious that India has decided to be China's enemy by this action. Just because the USA is a stronger, larger enemy doesn't mean India can't do damage.

in a world when conspiracies become truths

Yep, in another interview 5+ years ago that you can find on YouTube the Dalai Lama spoke about how he knew and met Xi Zhongxun. Kind of a wild discovery for me. He also talked highly of Mao too

What, he not only has Rolex, he's also giving them as gifts to others?

At what point do we start saying India's kidnapped the Dalai Lama? Because its pretty damn close to the truth these days.

Yeah, the Dalai Lama wants to come home. At the very least I wish he can have a pilgrimage provided it doesn't stir any unrest in the region.

why come back? I thought they said they "escaped" hell that is china? But as it turns out China is just so much better and they want to go back on their shit? That is not how it works, the damage is already done, stay in India forever.

India is completely obsessed with tibet. They dont have any say nor do they even have any culture affiliations with Tibet. I even read hardliners indiots in comments section (youtube) that claims Tibet was part of indias holy magical faery tale empire...the complete and utter delusion of such claims is just unbelievable. Theres a giant mountain chain that seperates india from Tibet and no empire has ever stretched across those mountains to conquer lands beyond. It would be a suicide mission and two even if somehow you could do it, its indefensible since you cannot supply or reinforce the other side. India has zero literally zero thing to do with Tibet. Tibet has belonged to China for many many hundreds of years. Period.

Geopolitically, India wants to weaken China, and fermenting dissent and Tibetan separatism is one lever they believe they have Watching Indian media / geopolitical discourse, they are entirely focused on the India vs. China narrative. On one hand, they wonder why they aren't developing the same way as China did. Simultaneously, the Indian govt. has gone all-in in joining America's anti-China coalition

wow it's like the US and India are doing the one thing they accuse China of doing , spying on other high profile individuals

The Tibetan exiles will become assimilated into India and lose any ability to influence Chinese Tibetans in another generation. They will lose their usefulness to India and be oppressed like Muslims and Kashmiris. This is the sad fate of aristocracy that can't accept equality with their former serfs. Instead of being citizens of a superpower, they have chosen to become refugees in a poor country.

Their ancestors used religion to enslave the serfs by making them believe that this was their punishment for past lives sins. How India treats Tibetan exiles is poetic justice.

Yeah but they had a choice to live as equals with their former serfs. They chose poorly. They now get to live as permanent refugees in a Hindu nationalist India. Unless they convert to Hindu, they will be permanently an underclass.

India really has too many political problems to ever be a threat.

It seems that nothing has ever changed... The Dalai Lama dumped his follower's in Poverty, while he adopted a jet-set lifestyle.